Monasteries are building or complex of buildings comprising quarters, workplaces, and hall meant for rituals and prayers. Generally, the hall of the monastery includes antique Buddha statues in the rear part of the hall, along with other statues of Bodhisattvas and seats for the monks and nun for prayer. The size of the monastery varies greatly like for e.g. the monastery may be a small place accommodated by only one monk; a small community of monks or nuns accommodating in a single building, or it may be huge with more than one building with sufficient facilities. The main purpose of the monastery is to preserve and spread wisdom and knowledge of the Gautama Buddha. This is generally done with the help of the monks and nuns residing in that particular monastery. Apart from that the senior monks and nuns also guide and educate the fellow monks and nuns. Therefore there are numerous monasteries around the world working continuously to accomplish the given objectives. Some of the few monasteries are listed below: 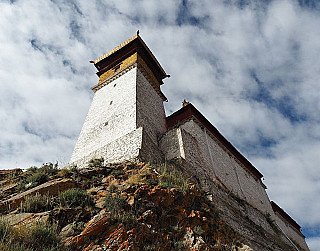 Yumbulagang is also called Yumbu Lhakhang which is an ancient structure in the Yarlung Valley, Nedong County which is about 192 Km southeast of Lhasa and 9 km south of Tsetang. It was believed that Yumbu Lhakhang was built for the first Tibetan King, Nyatri Tsenpo in the second century BCE who was descended from the sky. It was also believed that a golden stupa, a jewel, and a sutra fell from the sky onto the roof of the Yumbu Lhakhang which was followed by the announcement that there will be a person who will understand the meaning of the sutra in next five generations.

Later, Yumbhu Lakhang became summer palace of Songtsan Gampo, 33rd Tibetan King and then he transferred his position to Lhasa and finally, Yumbu Lakhang became a shrine. A thousand years later, the palace was turned into a monastery for the Gelug School during the reign of the 5th Dalai Lama. During the Cultural Revolution, the Yumbu Lakhang was heavily damaged and as a result, it was maintained to a single storey only in 1983. 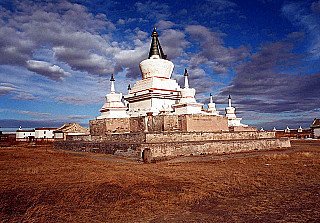 Erdene Zuu Monastery is located in Ovorkhangai Province, which is approximately 2 km northeast of the center of Kharkhorin and adjacent to the ancient city of Karakorum. It is believed that this monastery is the earliest surviving Buddhist monastery in Mongolia. It is recorded that Abtai Sain Khan, ruler of the Khalkha Mongols ordered the construction of the Erdene Zuu monastery in 1585. He got the idea to construct the monastery after the meeting with the 3rd Dalai Lama and declaration of Tibetan Buddhism as the state religion of Mongolia.

In 1688, the monastery was damaged during the wars between Dzungars and Khalkha Mongols. It was again rebuilt in the 18th century. But in 1939, the monastery was again destroyed which was ordered by Communist leader Khorloogin Choibalsan. This time only three small temples and the external wall with the stupas survived. In 1944 Joseph Stalin pressurized Choibalsan to maintain this monastery along with others with the motive to prove that the communist regime allowed freedom of religion. Later in 1947, the monastery was converted into the museum and for the four decades, this monastery followed Gandantegchinlen Khiid Monastery which became Mongolia's only functioning monastery. After the fall of Communism in 1990, the monastery was handed over to the lamas and finally, it again became a place of worship and prayers.

Kye Gompa is a Tibetan Buddhist monastery located on top of a hill at an altitude of 4166 m above sea level which is located at Spiti Valley of Himachal Pradesh, Lahaul and Spiti district, India. This monastery is considered to be the biggest monastery of Spiti Valley and a religious training center for Lamas as well. It is believed that this monastery was founded in 11th century by Dromton, a pupil of Atisha, famous teacher of that period. This monastery was destroyed in the 14th century when the Sakya sect rose to power with Mongol assistance. Kye Gompa was attacked again by the Mongols during the 17th century, during the reign of the Fifth Dalai Lama. Again the monastery was destroyed during the wars between Ladakh and Kulu. Again, in 1841, the monastery was severely damaged by the Dogra army and again in the same year, it suffered more due to Sikh army. In 1840 and 1975 it was again damaged by fire and a violent earthquake. The damaged monastery was then renovated with the help of the Archaeological Survey of India and the State Public Works Department. Kye monastery is equipped with a huge collection of antique Buddha Statues, ancient murals, and books.

The Yonghe Temple is popularly known as the Lama Temple which is a monastery of the Gelug school of Tibetan Buddhism. This monastery is located in Dongcheng District, Beijing, China. The construction of this building was started during the Qing dynasty in late 17th century. The main purpose of the construction was to serve as an official residence for the court eunuchs but it was later converted into the residence of Prince Yong, fourth son of the Kangxi Emperor. After Prince Yong ascended the throne as an emperor in 1722 CE, half of the building was converted into a monastery for monks of Tibetan Buddhism and other half was the imperial palace.

After the Emperor's death in 1735 CE, his coffin was placed in the building and then the successor of Yongzheng Emperor, Qianlong Emperor donated for the monks and consequently, the palace was converted into the monastery in which large numbers of Tibetan Buddhist monks from Mongolia and Tibet resided. And hence forward, the monastery became a central administration for Lamas.

In the monastery's central hall, the Hall of Harmony and Peace, it installs three bronze antique Buddha statues from the Three Ages, Gautama Buddha, Kasyapa Matanga, and Maitreya Buddha. Hall of Everlasting Protection has the coffin of Emperor Yongzheng along with the statue of healing Buddha. The Hall of the Wheel of the Law which functions as a place for reading scriptures and conducting religious ceremonies. This hall contains a large statue of Je Tsongkhapa, founder of the Geluk School. The Hall of Boundless Happiness contains an 18 m tall Buddha statue of Maitreya which is carved from a single piece of white sandalwood.

Thikse Monastery is located at an altitude of 3600 m in the Indus valley and is on the top of a hill in Thiksey Village which is 19 km east of leh in Ladakh, India. This monastery is affiliated with the Gelug sect of Tibetan Buddhism. It is considered to be the resemblance of Potala Palace in Lhasa, Tibet and is the largest monastery in central Ladakh. This monastery is twelve-storey complex and is installed many buddhists arts such as antique Buddha Statues, Stupas, Thankas, wall paintings, and swords.

This monastery houses 15 m tall statue of Maitreya Buddha, the largest statue in Ladakh which covers two storey of the building. It is believed that the statue took four years to build it. The Buddha is portrayed as seated in the lotus position which is different from his common depiction of standing. 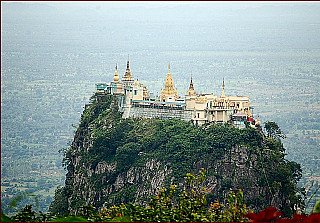 This monastery of Taung Kalat is been built on a top of an extinct volcano, Mount Popa, which is at a height of 1518 m and to reach the monastery, visitors needs to climb 777 steps. This monastery is situated in central Burma which is around 50 km away from the medieval city of Bagan. It is believed that the mountain rose as a result of the great earthquake in the 5th Century BCE. One can enjoy a panoramic view of the surrounding of the Taung Kalat from the top and also the beautiful scenery of the ancient city of Bagan as well. It is believed that the volcano is extinct in the Taung Kalat. 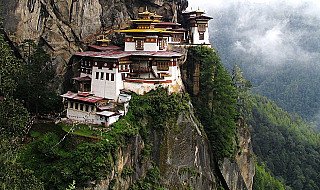 Paro Taktsang is also known as the Taktsang Palphug Monastery and is also popular with the name of Tiger's Nest which creates an impressive sight. This monastery is located in the edge of a 900 m cliffside of the upper Paro valley in Bhutan. The monastery was built in the late 17th century around the Taktsang Senge Samdup cave. It is believed that Guru Padmasambhava meditated in this cave for three years, three months, three weeks, three days, and three hours in the 8th century. This site has been cultural icon and symbol of Bhutan. That's why this place is taken as a Himalayan sacred Buddhist site.

View our collection of statues and other arts in our catalog