Majishan Grottoes is located on the side of the hill of Majishan in Tianshui, Gansu Province in the northwest of China. This grotto is one of the four major Buddhist Grottoes located here in China which has over 7000 antique Buddha statues of different sized and almost 1000 square meters of murals. It is believed that the influence of this artistic creation came from the northwest, through central Asia along the Silk Road which is near to the Grottoes.

History behind the Grottoes 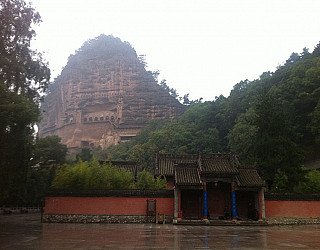 Before the statues were created in the Grottoes, it is recorded that the monk, Tanhung arrived at Maijishan and henceforth, build a small monastic community between 420 and 422 CE. It was written that the main reason to move in Maijishan was the invasion by the Sung army in Chang'an, where he lived previously. Later on, he was joined by 100 Buddhist followers along with a senior monk, Xuangao. As time passed by their community grew and they had nearly 300 members. Therefore, the monastery began to grow but the senior monk, Xuangao later moved to the court of the local king. He remained there until the area was captured by the Northern Wei and along with other people were forced to migrate in the Wei capital. During this period, the monk, Tanhung left Maijishan and traveled south in Cochinchina and live there for a decade or so and ultimately burned himself to death. It was believed that the statue slowly began to carve while the monks were living there.

The Northern Wei Dynasty was good to Maijishan. They didn't destroy that monastery but supported the caves and likely to create more of the Buddha Statues. The Luoyang capital city of Wei and the main road, Silk Road helped the site to become more famous and generated funds for the creation, protection, and perseverance of the statues in the site.

Later in the Song and Ming Dynasties, the monasteries and the statues found in the caves were renovated and repaired. Therefore, the statues were more distinctly Chinese due to the influences from central and eastern China.

Antique Buddha Statues in the Grottoes 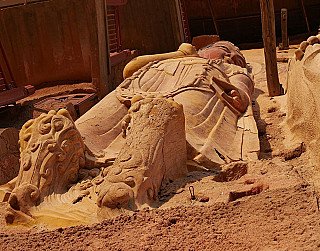 The Maijishan Grottoes are a series of 194 caves which is set to be an excellent example of rock cut architecture. This grotto contains over 7000 Antique Buddha Statues and over 1000 Square meters of murals. These statues were made in two distinct sides of the cliffs, eastern and western. The eastern side of the cliff has 141 caves and are named accordingly to Cave #51- 191. The western side of the cliff has 50 caves which are named accordingly to Cave #1-50. These caves were explored by a team of Chinese archaeologists from Beijing in 1952-53.

At the front of the eastern and western sides, a large Buddha Statue of Amitabh Buddha which have been carved along with two other Bodhisattva. These statues are around 16 m in height and the caves surround these huge statues. The caves houses the seated Buddha flanked by bodhisattvas, disciples, and monks. The most common Buddha is carved in this grottoes is of Amitabh Buddha. The bodhisattvas that are carved in the caves are usually Avalokitesvara on the right side and Mahasthamaprapta on the life side. The Bodhisattva, Avalokitesvara can be distinguished with the small water flask which is held by left hand and sometimes he holds a heart-shaped, or pippala-leaf shaped object.

View our collection of Buddhist arts and crafts

The medium of the statues

Regarding the medium of the statue found in the Grottoes, the huge statues of Buddha and Bodhisattvas on either side of the cliff- eastern and western- is stone cut statues but the statues found inside of the Grottoes are clay made statues which are added with some sort of binding agents to preserve the statues. The statues in the cave 117, 127, 133, and 135 are generally made up of sandstone.

These statues were restored and well preserved over the period of 12 dynasties, however, some parts of the statue were destroyed due to natural and man-made calamities. But still, we must consider that the Grottoes are standing on its own and also the archeologists agree that these kinds of statues and Grottoes have helped them to understand the growth and progress of the artistic creation of the Chinese statues and as well as spreading the Buddhism and its history in China.

View all of our collection of Buddha statues in our catalog