Look at our Buddha statues collection

Dambulla cave temple, also known as Golden Temple of Dambulla is the largest and best-preserved cave temple complex in Sri Lanka. Dambulla cave temple is situated at 148 km east of Colombo and 72 km north of Kandy in Sri Lanka. The construction of this temple dates back to the 1st century BCE. It is believed that Valagamba when exiled from Anuradhapura, took refuge in these caves for almost 15 Yrs. After reclaiming his capital, he built a temple and later other kings also added many statues and caves. By the 11th century, the site had become a major religious center. Later in the 12th century, Nissanka Malla of Polonnaruwa painted the caves with the golden color and also added about 70 antique Buddha statues. During the 18th century, the caves were restored from damages and the caves were again painted by the Kingdom of Kandy with the motive to preserve the religious site.

This cave temple consists of five caves which are under a vast overhanging rock which is 150 m high. These caves are carved with a drip line in order to keep the interiors dry. These caves were first one to build in this area, during the periods of Anuradhapura and later on Polonnaruwa also carved Buddha statues and as were as murals in order to decorate these places. The ceilings are painted with patterns of religious images - mainly Buddha and Bodhisattvas and as well as various gods and goddesses. We can observe a panoramic view of the surrounding flat lands and also the rock fortress, Sigiriya which is 19 km away from the site. The largest cave measures about 52m wide, 23 m long and is 7m tall and its highest point. Apart from Statues of Buddha, Statues of Hindu deities are also carved here.

The first cave: Cave of the Divine King 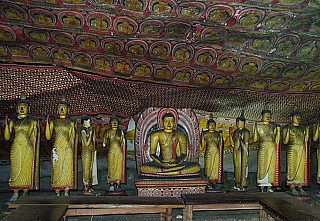 This cave is also known as Devaraja Lena in the local language. The meaning of this word is Devaraja - King and Lena - Cave in the Sinhalese Language. Therefore it is called as Cave of the Divine King. This cave houses 14 m Buddha statue carved out of the rock. This Buddha statue has been repainted multiple times and the last paint was applied in the 20th century. Apart from the statue of Buddha; Statue of Ananda, Buddha's favorite pupil have been installed at the feet of the Buddha while Statue of Vishnu, Hindu deities have been installed at the head of the Buddha.

The Second cave: cave of the Great Kings

This cave is the largest cave found in the Golden Temple of Dambulla. This cave houses around 16 standing Buddha statues and 40 seated Buddha statues. Apart from these Buddha Statues, there are Statues of Gods Saman, Vishnu and as well as statues of King Vattagamani Abhaya and King Nissanka Malla. Since this cave houses statue of Great Kings, therefore the cave is also known as Cave of the Great Kings. The Buddha Statues were carved from the rock which is followed by Bodhisattvas, Maitreya and Avalokiteshvara. The cave also has a dagoba and a spring water, which is dipped out of the crack in the ceiling. It is believed that this water has the healing powers. The paintings on the walls and ceilings date back from the 18th century which represents Buddha's life history and also the dream of Mahamayato temptation by the demon Mara. The pictures also demonstrate the important historical events of the country.

The Third cave, Great Monastery also consists of Buddhist Statues, Buddhist arts, and murals. The painting that is painted on the ceiling and walls are in the typical Kandy style. These paintings were painted during the reign of King Kirti Sri Rajasinha. He was Buddhist revivalist and was famous during his period. The cave also consists of statues of the king. This monastery is still functioning and is the condition of best preserved in Sri Lanka.

Below the Cave temple, there is Golden Buddha Statue placed inside of Dambulla golden temple. The caves consist of various Sinhala sculptures as well as Sinhala arts. The statue placed in this room has various sizes and out of them, the largest statue measures 15 m long.

View our statues of Buddha from Nepal