The Dazu Rock Carvings, a series of Chinese religious sculptures and carvings, is located 160 km in the west suburb of Chongqing City. The statues and carvings, over 60,000 in numbers which are spread around 76 places in Dazu, are influenced by Buddhist, Confucian, and Taoist beliefs and are built around 7th century CE. These structures are rock cut cave shrines and rock relief carved into the open rock faces. Among them, it is found that the carvings at Beishan Hill and Baodingshan Hill are better and best in comparison to other carvings.

The first ever carving at Dazu Rock Carving was started at around 650 CE during the early Tang Dynasty but the maximum numbers of statues and carvings were built only in the late 9th century during Song Dynasty. This was when Wei Junjing, Prefect of Changzhou, excelled at the carvings on Mount Beishan, and his example was followed by the collapse of the Tang dynasty by locals, and monks and nuns during the Five Dynasties and Ten Kingdom period. The first statues, built in the Southern Song Dynasty, were cliff-side stone carvings on Baodingshan hill which is 15 km northeast of the Dazu County.

Looking for Buddha statues for your surrounding? View our catalog

In the 12th century, a Buddhist monk named Zhao Zhifeng also began to work on the elaborate sculptures and carvings on Mount Baoding, dedicating his 70 years.

The Buddha statues that are carved around the surrounding areas of Dafowan are the largest and best preserved. Apart from Dafowan, Buddha statues on Beshan hills are also famous ones. The hill is located at 1.5 km north of Dazu and was started to carve at the late Tang dynasty and completed only during the southern song dynasty. This place houses 10000 fine carved images. 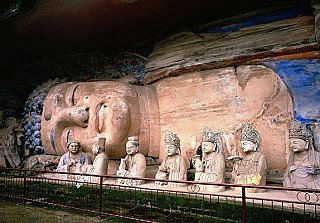 It is believed that Dazu Rock Carvings is an example of significant contribution to artistic expression in China. The statues portray examples of moral and rational issues like the punishment of evildoers, encourages people to do good, control of their desires and regulate their behavior. In the Dazu County, there are various sites out of which below mentioned sites are the famous ones.

This Rock Carving is carved in Baodingshan Mountain which is located 15 km away from northeast of Dazu County, Chongqing. The statues were carved during late 11th century to the early 12th century which was designed and organized by Zhao Zhifeng, a famous monk. The construction of these sculptures has lasted over 70 years. Located here in Baodingshan, Shengshou Temple is majestic and magnificent. This temple was burnt by Yuan and Ming armies but later during the period of Ming and Qing Dynasty, it was renovated and in Qing Dynasty, the halls - Shanmen, Hall of Heavenly Kings, Sakra Hall, Mahavira Hall, Buddhas of Three Periods, Rangden Hall and Vimalakirti Hall - were rebuilt.

The most exotic statue carved at this carving is Dafo Bay due to the themes of the statues which are never repeated and each cave has the connection in religious doctrine as well as patterns and forming a whole. These rock carving also portrays the philosophy of Buddhism and characteristics of Song Dynasty. 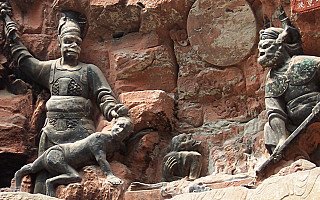 This Rock Carving is located 2 km away from north Dazu County, Chongqing. The construction of this carvings was started in the late 9th century during Tang Dynasty and then the construction followed to Five Dynasties and then South Song Dynasty. The construction of all the sculptures built in this carving was completed only after 250 Yrs. About 10,000 Antique Buddha Statues were installed at different places - Fowan, Yinpang slope, Guanyin Slope, Beita Temple, Foer and other places. Among them, Fowan has large numbers of Buddha Statues, about 290 grottoes.

This rock carving is carved at Nanshan Mountain which is located 2 km away from Dazu County, Chongqing. Jade Emperor Temple, located here, is well preserved on the top of the mountain. This carving has 15 grottoes which are influenced by Taoism. This carving houses largest number of Taoist carvings ever existed in China and also the complete carving group showing system of immortal of Taoist.

Apart from above-mentioned carvings, Shimenshan and Shizhuanshan Rock Carvings are also magnificent and famous one. However, these grottoes were shut down until 1961 CE. After that these grottoes were open for Chinese only and for foreign visitors, this place was open only in 1980.