Gal Viharaya is a rock temple of the Buddha located at the ancient city of Polonnaruwa in North Central Province, Sri Lanka. It was originally named as Uttararama which means Northern Monastery. It was built by King Parakramabahu I (1153-86) in the 12th century. The main feature of the temple is four Antique Buddha statues carved into the face of large granite rock depicted in a different position. The statue is considered to be among the best examples of the rock carving and sculpture of the ancient Sinhalese. In order to make the statue, the rock has been cut almost 15 feet (4.6 m) deep to create a rock face to accommodate the statue.

By the time, Parakramabahu I ascended to the throne, the Buddhist priesthood in the country was divided into three community. They were Abhayagiri Vihara, Jetavanaramya and Maha Vihara. Therefore, King Parakrambahu I held a congregation of monks with the objective to reconcile the three communities and by excluding the corrupted monks. It is written in the inscriptions on the same rock that the area in front of the statue has great historical importance because it was where the congregation of the monk was held. 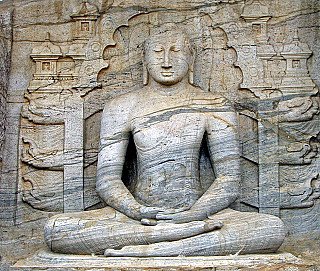 Among four statues, two of the Antique Buddha statues is represented in the seating position depicted in Dhyana Mudra; one is represented in standing position and last one in reclining position. Among two Buddha statues that are portrayed in seating position, one is of large figure and another one is smaller in size and is seated inside an artificial cavern. The statues have been carved in such a way that the height of the statue is equaled to the height of the rock and uses a maximum possible area of the rock.

As according to the position, towards the far left, there is an Antique Buddha statue in seating posture portrayed in Dhyana Mudra. The sculpture is 15 ft. 2.5 inches tall and the seat is carved in the shape of a lotus flower. The statue is placed on a carved throne which is decorated with makara images with four identical small statues of the Buddha inside the throne. The small statues are also identical to the large one and are placed at the top part of the throne. It is believed that the statue has the influence of Mahayana Buddhism.

The right to this statue, there is an Antique Buddha Statue of 4 ft. 7 inch tall in a seating posture. This sculpture is also portrayed in Dhyana Mudra and is placed inside the artificial cave named as Vidyhadhara Guha. The cave is 4.5 ft. deep into the rock and its width and height is 26 ft. and 12 ft.9 inches respectively. The base of the lotus shaped seat of the Buddha image is also decorated with designs of lions. A throne and a parasol have more elaborative design than the larger statue. The halo is also carved behind the head of the Buddha statue. There are four armed deities in the side of the Buddha Statue.

Towards the right of this Buddha, there is a standing Antique Buddha Statue depicting in an unusual mudra. The sculpture is 22 ft. 9 inches tall and he stands on a low pedestal shaped like a lotus. The statue leans back in a relaxed manner and is depicted in folded arms across its chest. It is also depicted a sorrowful expression in the statue's face.

Towards the Rights, there is a statue of Buddha in reclining posture which shows Buddha's parinirvana. This sculpture is the largest of all other three statues.

The height of this statue is about 46 ft. and 4 inches. In this statue, the Buddha is depicted lying on his right side with right arms supporting the head and the left arm lies along the body and thigh.

According to the archaeologist Senarath Paranavithana, the Buddha Statues were coated with gold in their early years. The salient feature of this Buddha statue is broader forehead with the robe carved with two parallel lines suggests that these art pieces are influenced by Amaravati School of art. Therefore these statues are considered to be best examples of ancient Sinhalese sculpture and carving arts. Unlike other statues of the same period, these statues are well preserved and are one of the most visited Buddhist pilgrimages site located in Srilanka.

View our collection of statues and arts in our catalog