A mudra is a symbolic or ritual gesture, if depicted during meditation, is believed that positive energy flows throughout the body. Mostly the mudras are depicted through the hands and fingers but there are some mudras that are depicted through the entire body. There are many studies on mudra which suggests that regular practice of mudras contribute to good health and also serves as preventive measures as well. It is believed that the position of our hands has the ability to influence the energy of our physical, emotional and spiritual body. These special mudras also help to link the brain to the body, soothe pain, stimulate endorphins, change the mood and increase our vitality.

In Buddhism, we can notice Bodhisattvas, other deities and Antique Buddha Statues depicted with these mudras some time along with holding different objects. The monks also use different mudras while meditating.

Various Mudra that is depicted through Antique Buddha Statues is as follow as: 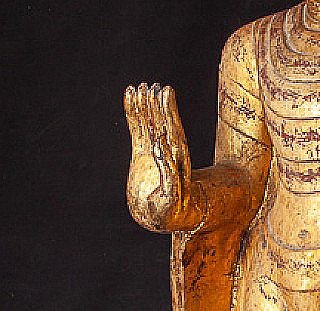 This mudra represents protection, peace, kindness and the dispelling of fear. Hence, this mudra is also known as the gesture of fearlessness. About the gesture, it is generally shown with the right arm bent and raised to shoulder height. The palm faces forward with fingers pointing upright and attached to each other. The left hand is rested by the side with palm facing forward. This mudra is portrayed with the standing Buddha statues but in Thailand and Laos, this mudra is depicted with the walking Buddha as well. In Japan, while portraying Abhaya Mudra, the middle finger is slightly projected forward. It is believed that this gesture was shown by Buddha Immediately after attaining enlightenment. This mudra was also used by the Buddha itself when attacked by an elephant.

While portraying Buddha in sitting positing left hand is depicted resting on his thigh but his fingers pointing downward and palm facing front. The seating Buddha is also depicted with Abhaya Mudra along with Dhyani Mudra, i.e. resting in his lap and his palm facing in an upward direction. Generally, Abhaya Mudra is portrayed by the right hand and Dhyani Mudra by the left hand. 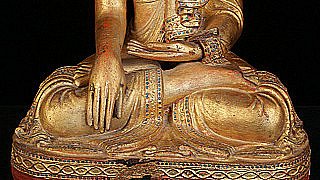 This Mudra is one of the most common iconic images of Buddhism. This mudra is also known as the gesture of earth witness. About the gesture, this mudra is shown with the Buddha in sitting position with his right hand resting on his thigh with the palm facing inward and touching the earth. The left hand is shown in Dhyani Mudra with palm upright and resting in his lap.

Another name for Bodhyangi Mudra is Vajra Mudra because of the symbol made by the hands. This Mudra is also known as the mudra of the six elements or the fist of wisdom. About the gesture, the left index finger is pointed upward and is grasped by the right hand. The Vairocana Buddha statues are usually depicted with this mudra. 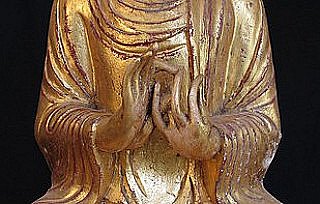 This mudra is also known as Vitarka Mudra. This mudra represents Buddha's first discourse after his enlightenment to his disciples in Deer Park in Sarnath. Therefore, only Siddhartha Gautama Buddha is depicted with this mudra but sometime Maitreya Buddha is also shown with this mudra. This mudra is also known as the gesture of teaching of the wheel of dharma. About the gesture, both hands are placed in front of the chest, close and together. The right arm is bent and raised to shoulder height. The palm faces forward but the tip of the index finger and thumb touch each other forming a circle. The left-hand rests in the air with palm in the upright direction. The tip of index finger and thumb of left hand also touches each other forming a circle. Sometimes the left palm is slightly portrayed as tilted in an inward direction. 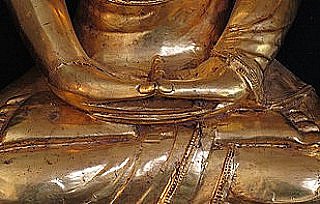 The Dhyani Mudra is also known as the gesture of meditation and sangha. Generally, the statues of Siddhartha Gautama Buddha and Amitabha Buddha are depicted with this mudra. The mudra is also used with the statues of Bhaisajyaguru, the Medicine Buddha. About the gesture, both hands are placed on the lap with palms facing upright direction. The right hand overlapping the left one and fingers are fully stretched and thumbs being diagonal with each other.

This mudra is used even before Buddha used it. The yogis in search of salvation have used this mudra during their concentration, healing, and meditation exercises.

It is believed that Karana mudra expels demons and removes hindrances. The gestures of this mudra are made by bringing the right arm bent and then raised up to the height of the heart with the palm facing in the front direction. The index and little finger are raised and middle and ring finger is bent down towards the center of the palm. The thumb is used to grab the bent fingers. 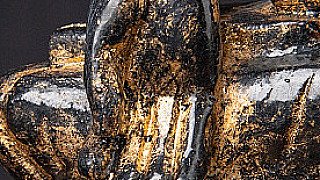 The Varada Mudra is also known as the gesture of generosity. This Mudra signifies compassion and sincerity. The Varada Mudra is used alongside other Mudras in order to portray the Buddha. Mostly it is used by left hand and is seen with Abhaya Mudra. About the gesture, the left hand is usually shown in a revered figure resting in the lap.

View all of our Buddha statues in different Mudras