We must admit that the portrayal of Buddha in the statues, arts, images are not the actual or natural representations of what really Buddha look like. The antique Buddha statues and other images were made only after 500-600 years later, approximately. The first one to make the statue was the Gandhara who were more influence with the Greco culture so the statues looked more likely westerns. Slowly, as time passed by the statue got more influence from south Asian culture. Even though the physical appearance of the Buddha was the influence of different cultures, the gestures and postures were from the Buddhist scriptures. Therefore the Buddhists believe that the Buddha statues represent an ideal reality. The perfect Buddha Statues are only possible when the artists are in a state of Samadhi which helps him to visualize Buddha's the ideal reality. Therefore, Buddha statues are not identical because the artists make the statue out of his visualization of Buddha but this doesn't mean that the artists are free to carve the statue, they must follow certain rules of representation which must be adhered.

That's why if we look at the Statues created by the Gandhara, they usually are depicted in a gesture of benediction, with the right hand held at shoulder-height with the palm facing forward and the fingers together and slightly bent. The portrayal of Buddha was then varied by the end of the Gupta Empire, mainly seated meditative position was common. As Buddhism was spread to other parts of the world, the variation in the portrayal of the Buddha Statues was also seen gradually.

In Korea, even the physical appearance of the Buddha Statue was localized. That's mean the figure look a lot like Korean than the Greek. If we observe about the statues of Thailand and Laos then they have their own style of the depiction. This variation in Thailand and Laos was not formalized until 19th Century the general project of modernization was initiated. The key personality in this project was Siamese Royal Prince and Buddhist monk Paramanuchit Chinorot, a son of King Rama I. He was appointed as an administrator of Wat Pho royal temple in Bangkok in 1814. During his term, Monk Paramanuchit described and portrayed 40 different postures of Buddha in an illustrated work called Pathama Sambodhikatha. Even though Paramanuchit's illustrated postures of Buddha were new, they were justified through reference to the literary accounts of the Buddha's life. The creation of new postures was done due to the request of King Rama III. In Present context, bronze miniatures portrayed in above-mentioned illustrations can be seen at Wat Phra Kaew in Bangkok.

Features of the Buddha Statue 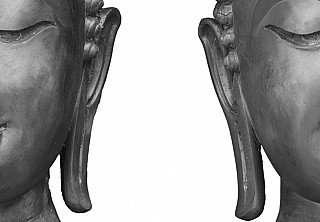 According to Digha Nikaya, a Pali text dated 1st century BCE provides a list of 32 physical attributes of the Buddha. Some of the attribute mentioned in this text is poetic or fanciful while others are more specific. There is mentioned some attributes like- legs like an antelope's, feet with level tread, projecting heels, long and slender fingers and toes etc. although Buddha Statues images doesn't reflect all those attributes.

In the text, it is mentioned that the Buddha had a protuberance on the top of his skull, the Usnisha which is shown as a spike and sometimes as a small bump. Another peculiar characteristic of Buddha is long earlobes.

Gesture and Posture of the Buddha

The Buddha is depicted in four main postures - sitting, standing, walking, and reclining - with different hand gestures - Touching the earth, Meditation, Charity, Fearlessness, Reasoning and exposition, and setting in the wheel. All these gestures and postures have their own meanings.

Dress of the Buddha 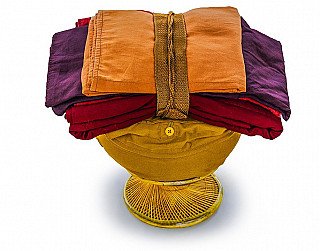 The Buddha is portrayed wearing a monastic robe. The robe is shown in two different ways, first one is in the covering mode, draped over both shoulders, and next one is in the open mode, leaving the right shoulder and breast uncovered. Often in many Buddha statues, the real robes are used too draped over the statue. When real robes are used, the robes are changed periodically usually at main festivals. Apart from the robe, the Buddha is also depicted wearing royal attire, however, this kind of Buddha statue is rare.

View our collection of Buddha statues