The Mogao Grottoes are also known as the Thousand Buddha Grottoes which consists of 492 temples. The cave is situated at 25 km southeast of the center of Dunhuang in Gansu province, China. Since it is located at Dunhuang, these caves are also known as Dunhuang Caves, however, this term is also used for other Buddhist caves that surround Dunhuang- Western thousand Buddha Caves, Eastern Thousand Buddha Caves, Yulin Caves, and Five Temple Caves. It is not doubted that the caves contain finest examples of Antique Buddha Statues as well as Buddhist art.

History behind the construction of grottoes 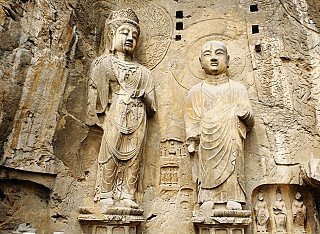 It was recorded that the first cave was dug in 366 CE with the purpose to meditate. According to a book written by Li Junxiu, a Buddhist monk, Le Zun had a vision of a thousand Buddha bathed in golden light which inspired him to build a cave. This is how the caves were initiated to carve. The mentioned story is also inscribed on a stete in Cave no 332. It is mentioned that Le Zun was later joined by a second monk, Faliang. The numbers there slowly grew and by the time of the Northern Liang, there was already formed a small community. Therefore, the family members of Northern Wei and Northern Zhou constructed numerous caves in that place. It is recorded that caves made during the period of the 4th-14th century were constructed by monks which were supported by donors- mainly patrons, Chinese emperors as well as merchants, military officers, and other local people. These caves were painted elaborately, firstly because it was believed that these paintings will help in meditation and second reasons were to use as teaching materials to aware about Buddhists beliefs and stories to those who don't have the idea about the Buddhism.

During Tang Dynasty, Dunhuang got its importance as a major religious center and also the main commercial center of the Silk Road. Therefore, the number of the caves reached over a thousand during this period. The two Big antique Buddha statue was also constructed in this period.

With the rise of Yuan Dynasty, the Mogao Grottoes went into a gradual decline and there was no more construction of new caves and when Ming Dynasty came into power the Silk Road was completely closed and Dunhuang slowly loosed its population and remain forgotten by the outside world.

Earlier, the purpose of the caves was only for the meditation but slowly the monasteries turned to pilgrimage place for the public as well as a place of worship. It was also recorded that at some period of history, the pilgrims to the caves were decreased and most of the caves were abandoned. 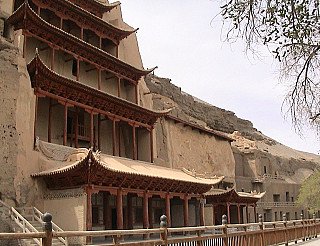 As it is already mentioned above that the caves were carved into the side of a cliff. The caves were more than thousand during the Tang Dynasty. With the passage of time, these caves were lost and currently, only 735 caves exist. The caves can be categorized into two distinct parts- northern and southern caves. It is observed that the southern- 487 caves are well decorated and best known which were used to be places of pilgrimage and worship while northern- 248 caves are mostly plain which were used to be living quarters, meditation chambers, and burial sites for the monks. Apart from the categorization into southern and northern sections, the caves can be clustered according to the specific era as well because of each different dynasty constructed the caves in the different area of the cliff. It has been recorded that large numbers of caves around 228 caves were constructed during the period of Tang Dynasty.

The caves found in the Mogao are the best examples of rock-cut architecture but it's quite different that Longmen Grottoes and Yungang Grottoes. It's mainly due to the local rock found in Mogao which is rather soft gravel which is not suitable for architectural details. Many Earlier caves were constructed in chaitya style as in found in Ajanta Caves of India. Other caves are influenced by traditional Chinese and Buddhist temple architecture. These caves can be seen with truncated pyramidal ceiling, painted to resemble a tent or gabled ceiling in order to imitate traditional buildings. Some caves meant for meditation are constructed in Indian Monastery style.

In the early stage, the statues were constructed on a wooden frame which is padded with reed and then modeled in clay stucco and is finally painted. However, the big statues found in the caves are made up of stone. Generally, the early statue is relatively simple and the statue of Buddha is placed in the center which is accompanied by Bodhisattvas, heavenly kings, devas, disciples and also mythical creatures. The early statues were also influenced by Indian and Central Asian prototypes, Greco-Indian Style of Gandhara.

Large reclining Buddha statue which measures 15.6 m long is installed in cave 158 also called Nirvana Cave. Behind the Buddha statue, we can notice mourners in murals or in sculptural forms along the length of the hall. In the wooden 9 storey building the large Buddha statue has been installed.

Mogao Grottoes is one of the famous Grottoes that has been built in the ancient period by different dynasty. The grottoes have been experienced multiple natural calamities but it has been excavated and preserved currently. The Mogao grottoes are listed in UNESCO World Heritage Sites in 1987 CE.

View our collection of Buddha Amulets