Home / Where to place your laughing Buddha statue in your room?

Where to place your laughing Buddha statue in your room?

Laughing Buddha often mistook as a Shakyamuni Buddha, mainly by westerns, is, in fact, a bodhisattva. His Chinese name is Budai or Putai which means "cloth Sack" and comes from the bag that carries all the time. He is almost portrayed as smiling or laughing, hence the name Laughing Buddha was given to him. Sometimes, he is also referred to as Fat Buddha because of his fat belly. Apart from his fat belly, he is depicted as a bald man wearing a robe or sometimes carrying prayer beads. He is often portrayed as entertaining and can be seen with children, especially five. As history suggests that Budai was a Chan monk who lived in China during the Later Liang period, i.e. 10th century. He was considered a man of good and loving character.

He is also believed to bring good luck, contentment, and abundance in an individual's life. That's why people love to decorate their space with the Buddha statues of Budai. Even the people have made huge Buddha statues which portrayed Bodai, in the parks and the Buddhist temple. 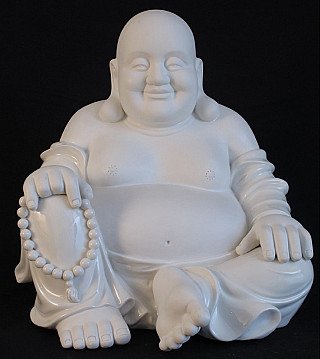 Generally, Bodai, when presented in Statue, is portrayed in five different ways -

• Laughing Buddha depicted with a bowl

• Laughing Buddha depicted with a fan in his right hand

• Laughing Buddha depicted with a sack or bag

The above-mentioned statue of Laughing Buddha has symbolical representations. Like, the statue I, playing with children represents good fortunes and also brings good luck and positive energy. In the second statue, monk's life which has been depicted by the bowl and is believed to be associated with renunciation of material possessions and attaining enlightenment. The third statue symbolizes happiness and joy. It is also believed that the fan which Buddha holds if waved then there will be banishment of troubles. The fourth statue symbolizes Buddha as a traveler and the last one represents meditation practice. The sack or bag in the statue means that the Buddha will collect all people's sadness, woes. The beads in the last statue portray or symbolize "Pearls of Wisdom" 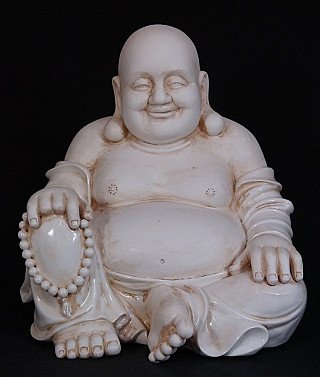 When we place a Buddha Statue we should consider few points so that the Buddha statues will be placed in right order. Some of the points are as follows:

Buy our Buddha statues from our collection