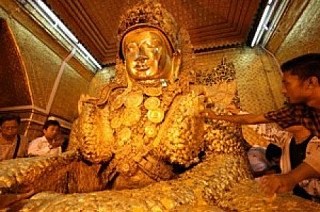 Are you looking to Buy Buddha Statues?

Some other new features were added in the Buddhist art in Myanmar. Most of the Buddha statues were mostly made of wood and gilded with gold leaf. Beautiful stone Buddha statues are also quite popular during those periods. These magnificent antique buddha statues were then covered with red lacquer and not only covered with red lacquer but also colored with red color and lastly they were decorated with glass inlays. The Buddha images in Amarapura Period were depicted in the form of the Mahamuni buddha image and the face of these Buddha images were round and made a bit plumped turning downwards. Other distinctive features that were introduced in these periods are circular pattern provided on the Sanghati, Monk’s robe, as well as shins and knees.

Do you have any interest on Burmese Nats? Look what we have in our collection