Buddhist art, that evolved during Pagan Period is one of the major Buddhist art that have influenced most of the Buddhist art tradition in Burma till now. Pagan Art was developed after the end of Pyu Period. Pyu Period was quite popular till 11th Centuries. But Buddha statues, Buddhist images, and other Buddhist sculptures of Pagan Art had already been popular during late Pyu Period Art. Pagan Period can be classified into following stages. They are: 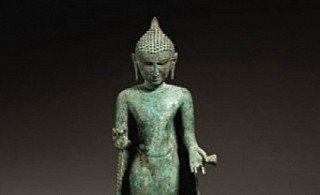 Early Pagan Buddhist art is quite unique from previous Pyu Buddhist art. Buddha statues, Buddha images that existed during Pagan period are more of a combination of local Buddhist style that came from Pala style existed in India. These Pala Styles were introduced through Mon and Arakan kingdom existed during this period. The early Pagan Buddhist art introduced various simple elements in Buddha statues such as Lotus-petal shaped Halo over the top of the head. It is said that the tradition of carving Halo came from western Tradition of Greece and Rome etc. Other elements introduced were the depiction of Buddha’s hair in the form of small coned curls, the depiction of Lord Buddha face in an oval shaped with a slightly pointed chin.

Medieval Pagan Buddhist art was heavily influenced during 12th century to mid 13th Century, and most of the pagan Art in Medieval Period was influenced under Pala Style of India that came to Pagan via Mon and Arakan Kingdoms. Though during this period, Theravada Buddhism was heavily influenced but some aspect of Pagan art were still influenced by Mahayana Buddhism. During medieval Pagan period, many Buddhist sculptures were made that bear similar resemblance of both Mon as well as Pala art. Due to this combination, it made difficult to recognize the exact the Buddhist school of art they came from.

The key elements and the gesture in Pagan Buddha statues were mostly carved in Mahayana Buddhist pattern and many of these gestures and elements would resemble in the form of one of the Thayani Buddhas. The key elements that would define the art of this period would be gestures of Lord Buddha as well as a material used to make Buddha statues and also the form of Monk’s robe wrapped in both shoulders. The material used in the pagan period are similar to normal tradition like stone Buddha statues, wooden Buddha statues, and the color would be less golden than that of Buddhist art in India. Another unique style that was introduced in Pagan period was the depiction of Urna in the forehead of Lord Buddha that would symbolize the auspicious mark.

The Buddhist art after mid 13th Century was refined and the features and gestures of Buddha statues were also better than the previous period. The face was more round and lord Buddhawas shown muscular than before. The Pra Ghetmala was shown semi-circular and the circular urna was depicted on the forehead of Lord Buddha. Buddha statues in this period were mostly made of materials such as bronze, heavy metal, sandstone or wood etc. As a whole, Buddha statues in later Pagan Period were better and unique than that of previous Buddhist art.

View our Buddha statues from Burma