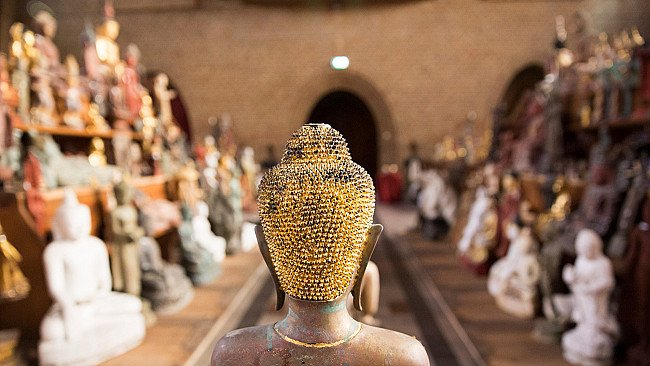 Antique Buddha Statue Gallery provides all types of Pyu Buddha statues that were made and crafted during 3rd Centuries to 10th Centuries. The style of early Pyu art was believed to be brought from India later style of Tibetan Buddha statues was also merged and new Pyu Buddhist style was found. Pyu Buddhist style can actually be categorized in three different styles that existed in different times of Pyu Period. They are:

The Hanlin Style (from the 3rd – 9th centuries)

The Hanlin Style was quite popular along with Pyu style during 3rd -9th Centuries. Actually Hanlin Buddhist art was the combination of local Pyu Buddhist art and Buddhist art highly influenced in Northern and Eastern India. The Buddhist sculptures and Buddhist art during Hanlin period mostly focus on making Buddha sculptures based on crowned Prince Buddha either in seated position with crossed legged or fold legged. This Buddhist art of Hanlin Period also depicts the antique Buddha of crowned Buddha with various symbols. These symbols were the depiction of five Dhyani Buddhas and Shakyamuni Buddhas. It is also said that Buddha images with sanghati (monk robes) were originated in Hanlin Period of Buddhist art.

View our Buddha statues in our catalog

The Pyu Style of Buddhist Art (from 3rd – 9th centuries)

The Pyu art originated from ancient city of SriKasetta between 3rd to 9th Centuries. This date goes back even before the combination of this pyu style and Mon style. This Buddhist art that consists of antique Buddha statues, Buddha images, Myanmar Buddha statues etc was named after the ethnic group that found this style i.e. Pyu Ethnic group thus giving the name “Pyu Style”. During this period, Buddha images with seated position were quite popular. Especially Buddha statues with crossed legged position as well Buddha statues with outer robe known as Sanghati were also made. Some were craved with sanghati over both shoulder as well as some with only Civara (part of sanghati) across only left shoulder of the statue. Pyu Buddhist art during this period were mostly crafted in thin bronze cast that consists of high silver and tin content proportion. Later during 9th centuries i.e. end of this period, Buddha images with Halo was brought in this style.

Early Pagan Style came to Myanmar after the late Pyu period of Buddhist art. Most of earlyPagan Buddhist art consists of the features of previous Buddhist art i.e. Pyu as well as Myan Buddhist styles. Most of Buddhist sculptures in this period features especially buddha statueswith decorations and ornaments. These Buddhist sculptures are especially crowned with decorations and ornaments and statues with simple monk sanghati were also decorated i.e. gilding etc. Early Pagan style also inherited popular trends of Pyu Style of SriKasetta such as portraying statues with symbols of five Thayani Buddhas.

View our collection of Pyu Buddha Statues from Burma